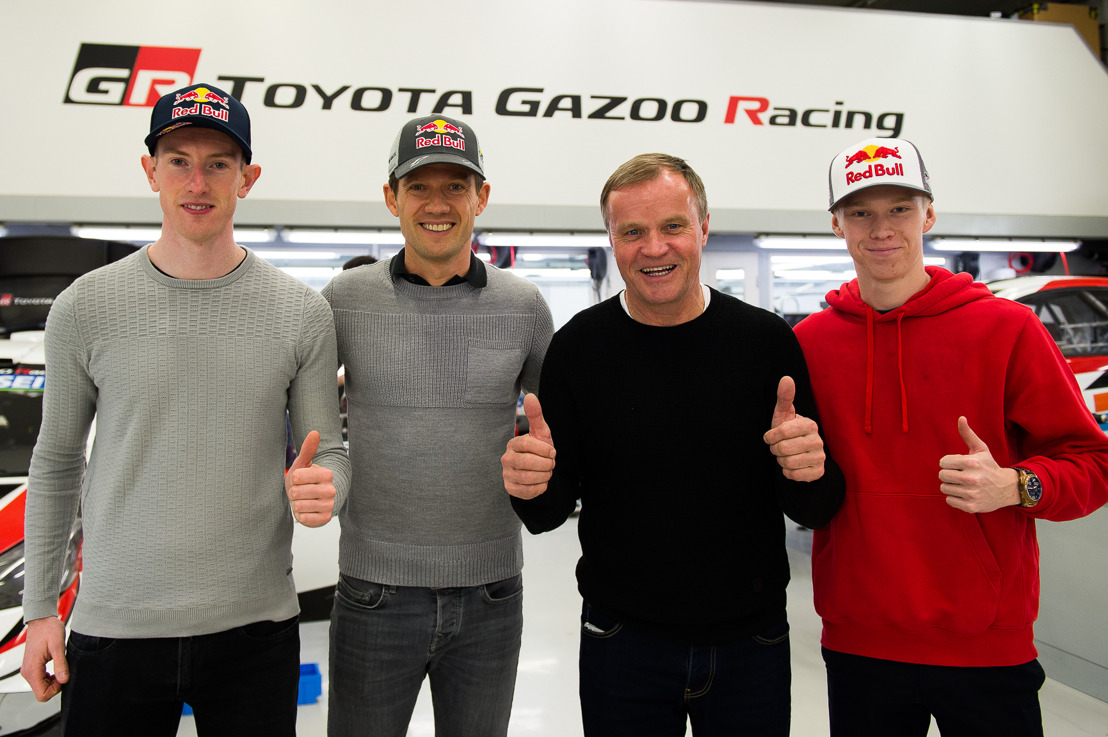 Quotes:
Tommi Mäkinen (Team Principal)
“I’m really pleased with the driver line-up we have been able to put together for next season. I believe it provides us with a great balance in our team as we target more championship trophies next year and in the future. We know how strong Sébastien is and we’re all looking forward to working with him and Julien. I think that being able to attract a driver with his record says a lot about what we have achieved in such a short space of time with this team. Elfyn is a driver I have been watching for some time. We’ve seen that he can have the speed to win on almost any surface, but he can also be very clever when needed and score good points. I’ve known Kalle since he was very young and it’s always been clear that he has something special. He still has lots to learn, but I believe that he is ready for this step now. I want to say thank you to Ott and Martin, Jari-Matti and Miikka, and Kris and Seb for all they have done for our team. I wish them all the best for the future.”

Sébastien Ogier
“I’m definitely very excited to be joining this team. It’s another new challenge for me and I’m looking forward to it. We already discussed it at the end of 2016, and although we didn’t manage to make it happen at that time, I’m now overwhelmed to start working with such an iconic brand as Toyota as well as my childhood idol Tommi Mäkinen. The plan is to aim for some success together and to try to win back the world championship. It’s an interesting line-up: I know Elfyn very well as I’ve worked with him before and I’m sure he can bring a lot to the team too, while Kalle has proven many things already in rallying, so he’s definitely got some talent and I’m sure he will improve very quickly. All three of us are new to the team, so it’s going to be challenging to learn the car and everything, but of course we’ll do our best to perform as quickly as possible.

Elfyn Evans
“Joining TOYOTA GAZOO Racing is a great opportunity for me and I’m really excited to get going. The team has been very successful since it came into the sport three years ago and I’m looking forward to be a part of it. Tommi has been very successful as a driver himself and knows what it takes to perform at this level. It’s been great to deal with him so far, and I’m looking forward to getting to know the team better as we ramp up towards the start of next season. 2019 was a mixed season for us – missing three rallies due to injury being the low point – but there were some strong results and performances as we competed for stage wins and podiums. Now I want to take that further, to be winning rallies more often and seeing what’s possible in this new chapter. It will be nice to work with Sébastien again too: With the experience and success he’s had, he’s a great guy to have in the team.”

Kalle Rovanperä
“I’m really excited to be joining the team. I think the goal for any young rally driver is to have a seat in a World Rally Car and now that chance is coming for me. It has been great for me to see how Tommi has been trusting me already when I first tested the car a few years ago, and it’s now really nice to be fully a part of his team. I’m sure that next year is going be quite demanding: The biggest challenges will be to learn the new car and also the rallies that are new on the calendar. For sure, the beginning will be all about learning the car and the speed and everything that comes with it. I think Seb and Elfyn will be really good team-mates for me with their experience. I have so much I can learn from them, so it’s nice to have them in the team also.”

Akio Toyoda (Team Chairman, TOYOTA GAZOO Racing World Rally Team)
Jari-Matti, thank you for fighting with us for three years.
When I visited Finland for the first time in 2014, Toyota had not yet decided to come back to the WRC. I was so excited because it was my first WRC visit and I stood in the hotel lobby to see the drivers in person. Jari-Matti, then a VW driver, was the first driver to arrive. When I excitedly greeted you, you said a friendly hello. While chatting, you noticed me as someone from Toyota, and you happily talked to me about your Corolla and Celica. This was the moment I made the decision to come back; we needed to come back to WRC while such a driver remembered Toyota competing.
You could say that if I didn’t see such a friendly VW driver back then, then maybe Toyota would not be in the WRC now!

When I heard you would become our driver two years later, I was very moved by this wonderful fate. Frankly speaking, I didn’t expect at the beginning of the season that we could win in our first season. The target was to get a podium finish within a year. However, you brought Toyota to the podium immediately in Monte-Carlo. And then, you brought us to the top of the podium the following month in Sweden. It was a dream experience.
I was so glad that we could finally stand together on the podium last year in Finland. When I look back at pictures from afterwards, I noticed that I sprayed the champagne bottle given by Ott towards you at first. I believe it shows how much I got excited for my first podium together with you.
I know you cherish your Corolla and Celica very much, so I believe you will continue to be a Toyota supporter. Let’s stay in touch.

Kris, you have worked hard for Toyota. You always attacked to the maximum and pushed the car to the limit, and gave a lot of advice from the viewpoint of a former engineer. This has made the Yaris stronger. Thank you for your contribution this year.

Lastly, Ott, I am happy like myself that you finally achieved your dream, becoming World Rally Champion. Myself and Toyota are very proud of helping to achieve it.
Unlike Mr. Tomoyama (President, GAZOO Racing Company), I have not been good at climbing the podium, but you taught me how to do it in Finland last year. Thanks to you, I could see the view from the top of the podium and get to know how sticky the champagne is. I really appreciated it.

I think your decision, “After achieving the goal, I want a new challenge with different environment”, is simply amazing. You will become Toyota’s rival next year. For us, having a strong rival is big motivation to move forward. Because you have taught me how to stand on the top of the podium and how to open champagne bottles well, I can shower the champagne to you from higher position when we see each other the next time. See you again on the podium!