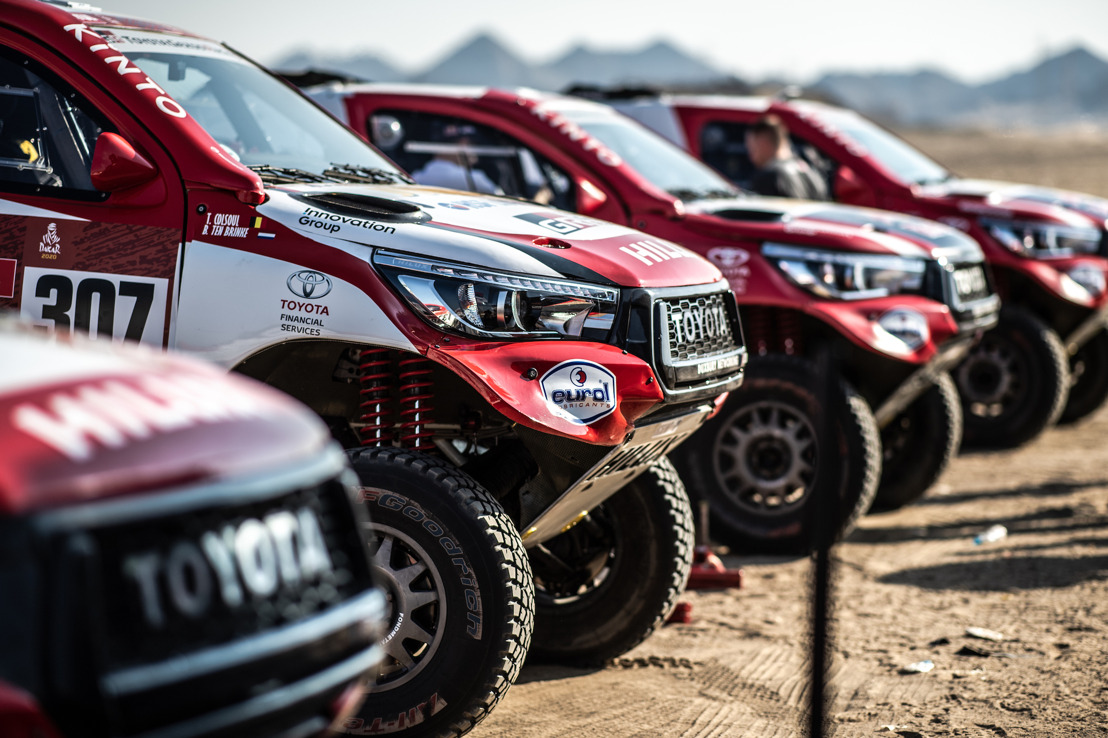 Glyn Hall, Team Principal: “Our shakedown went very well. All four TOYOTA GAZOO Racing crews were very happy with the cars, which is good news for me. If the drivers are happy, it means we are well-prepared for the race. Everything is looking good so far, and we are excited for the race to get under way.”

Nasser Al-Attiyah (No. 300): “My third Dakar victory last year was really special. We dominated from start to finish and to give Toyota’s first-ever overall Dakar Rally victory was really special. I had an excellent 2019 season with nine wins from 10 rallies. I only retired in Morocco, but it was actually a good thing. We experienced electrical problems which allowed us to better prepare the car and anticipate other problems for the big race. I’m ready for the Dakar Rally and quite excited. It’s going to be completely different, but I know the terrain very well. I took part in and won races in 2008 and 2011 on this terrain so I know exactly what to expect. The dunes are very tricky and totally different than those in South America. We have the same kind of dunes in Qatar and I grew up driving them with my father. There are only 110 kilometres between the dunes in Qatar in those in Saudi Arabia. The terrain suits me to a tee. So, I believe that I’m the favourite."

Giniel de Villiers (No. 304): “I grew up on a farm and raced everything I could. It began when I was four with a pedal kart. My father loved motor racing and he passed the bug on to me. I started my career in circuit racing, notably in touring cars before switching to all-terrain. The last Dakar Rally was a huge disappointment. We hit a rock and our hopes for victory were gone on day three. I have experienced a lot of highs and lows last year, but the Rally of Morocco win really boosted my confidence tremendously. I feel good in the Hilux. We’ve been able to make some good improvements during our many tests. Everything is in place. I’m getting used to my new navigator, Alex. We spent a lot of time together with the TOYOTA GAZOO Racing Team testing in South Africa. For sure, it’s strange to have someone different next to me, but sometimes change is good. Dakar Rally in Saudi Arabia will be new for everyone, except for our teammate Yazeed competing with Overdrive Racing also in a Hilux. The navigation will be interesting. We’ll find ourselves in completely isolated places just like it was when the rally was in Africa. It has been more than ten years since we experienced that. Our objective is still victory.”

Bernhard ten Brinke (No. 307): “I’ve recently sold my business which now gives me more time to do the things I want to do, such as preparing for the Dakar Rally. I’ve shown that I’m capable of Top 5 and podium results. We have the best car with the Toyota Hilux, the support of a full manufacturer team with TOYOTA GAZOO Racing, I have a great navigator in Tom, and my own condition is better than ever. Although there is never a guarantee of success, I know we are well-prepared. Despite some back luck in rallies last year, we’ve shown we’re fast.”

Fernando Alonso (No. 310): “I’m racing in my first Dakar Rally to see what this legendary event is like, but even more so I want to finish it. I know it will be a very big challenge. I don’t think there is anything more different compared to Formula 1 than the Dakar Rally. It’s an interesting and exciting challenge which certainly looks difficult on paper, but I want to take on the challenge, push myself to the limit, and learn from the experience to become a more complete racing driver. The preparation that I’ve done with TOYOTA GAZOO Racing over the past few months enriched me so much as a driver which is one of my priorities when I confront these kinds of challenges: to be better at the end of each experience.”