The TS040 HYBRID was already used as a rolling test bench and contributed to current road cars. With turbo engines increasingly in use on the road, TOYOTA expects to use the technology and know-how from WEC to make ever-better road cars.

A new powertrain concept brings different cooling and packaging demands, including an updated transmission to handle the significant increase in torque delivered by the turbo engine. Combined with a new aerodynamic concept, that means virtually every part on the TS050 HYBRID chassis has been redesigned by TOYOTA Motorsport GmbH in Cologne, Germany.

Powertrain components have played their part too in the improved aerodynamic performance of the TS050 HYBRID; by relocating the front motor-generator unit, better under-floor air flow has been achieved which will contribute to overall performance. Suspension kinematics have also been revised to optimise tyre wear.

The team, which includes several new faces, has already been busy testing the TS050 HYBRID, striving for performance and reliability, covering over 22,000km with positive results. The next test comes at Paul Ricard on 25-26 March, while the nine-race WEC season kicks off at Silverstone on 17 April.

Toshio Sato, Team President: “This is a very exciting season for TOYOTA GAZOO Racing, particularly because we have a completely new car with a new powertrain concept. This reflects the current trend in road cars and gives us more opportunities to transfer know-how and technology into TOYOTA’s road car developments. Our WEC activities are motivated by the development of technology and people; we are already seeing the results of our activities in current road cars. But as well as helping TOYOTA to make ever-better cars, we also want to win. Our clear target this year is to compete again at the front, after a very disappointing 2015 season. In Higashi-Fuji and Cologne, there has been a huge effort to prepare for this season; everyone is highly motivated and pushing together to get back onto the centre of the podium.”

Hisatake Murata, General Manager Motor Sport Unit Development Division: “The regulations for this season include a reduction in fuel flow and total fuel energy of approximately 7.5%. As motorsport engineers, we want to always increase the performance of the powertrain so it was important to compensate for this reduction with a more efficient, powerful powertrain. We believe a V6, direct injection, twin turbo engine achieves the best balance of power and efficiency considering the current regulations. Combined with our move into the 8MJ class, this will give us significantly improved torque compared to the previous powertrain; this was a key target for the new car. The new powertrain presents some challenges, particularly in terms of weight and cooling, but the team at Higashi-Fuji and Cologne has worked very hard to address these and I am confident we have met the challenge. We face tough opposition, as last year showed, but we are ready and I cannot wait for Silverstone.”

Pascal Vasselon, Technical Director: “Aside from some principles which have been retained to capitalise on previous years’ development, we have changed every single part. In many areas, like the powertrain and the aerodynamics, the concepts themselves have changed. The aerodynamic concept, and particularly the front face of the car, has changed drastically. We have spent thousands of hours refining this new concept and this time we have done more than incremental changes; we have significantly changed the way we handle the flow structure after the front downforce-generating devices. There has been a significant progress rate in WEC recently so we cannot afford to have any area of the package which is not fully optimised. The TS050 HYBRID has been developed on that basis. We want to be competitive. That is the minimum target we set ourselves - to be back in the game and competitive.”

Rob Leupen, Team Director: “The team has worked extremely hard on the TS050 HYBRID, which is the result of a close, productive cooperation. Our innovative motorsport technology, as well as the R&D opportunities in Cologne, is contributing to making ever-better cars and the development of road car engineers. At TMG we are delighted to welcome increasing numbers of colleagues from Japan to learn and utilise motorsport as a test bed for new technologies. We are continuously improving team work and this process is very positive; expertise is transferred between Cologne and Higashi-Fuji, and vice-versa, to help reach our targets in WEC. We have responded to a difficult 2015 by reinforcing our team with additional, younger faces throughout, including the driver line-up. The whole team has worked hard during the tests; we still have a long way to go but we expect to be competitive this year.”

While TOYOTA has no official test and reserve driver this year, young Japanese driver Ryo Hirakawa will be a part of the team, as a member of the TOYOTA Young Drivers Programme (TDP). Ryo, who is a race winner in Japanese Super GT and a former Japanese Formula Three champion, will also race an LMP2 car in the European Le Mans Series with the TDS Racing team.

He will join further tests this season as he acclimatises to the specific demands of an LMP1 car and, like his team-mates, will benefit from the experience of Alex Wurz, who has begun a new chapter in his career as an advisor and team ambassador for TOYOTA.

Anthony Davidson (#5 TS050 HYBRID): “I’m looking forward to getting started this season with the new TS050 HYBRID; it’s always an exciting time of the year. Last year it was obviously a disappointment but this season we will be stronger and hopefully more like 2014 when we were really competitive. It’s not going to be easy because the competition is strong but we are pushing hard, working on reliability and performance. We are all focused on playing our part and making progress as quickly as possible, as you can see with this completely new car. I’m really impressed with the TS050 HYBRID; I like the different sound of the turbo engine and the 8MJ system is a huge step forward. All the drivers feel that and it makes us realise what we were missing last year. I can’t wait to experience it in race conditions.”

Sébastien Buemi (#5 TS050 HYBRID): “I’m fully motivated to start the season. We’ve worked very hard and I’m sure that’s going to translate into lap times. The new car is definitely a big step forward. Our chassis has always been quite competitive and we’ve tried to make it even better and we have developed a lot in all areas. Obviously we have put a huge amount of effort into the engine as well as the hybrid system and we can already see the positive results. Thanks to everyone in Higashi-Fuji and Cologne for their hard work; it continues to be a big effort and we are still optimising everything. I cannot predict anything until we get out on track against the others in a competitive environment at Silverstone but my target for this season is clear; I want to be back at the top of the podium.”

Kazuki Nakajima (#5 TS050 HYBRID): “I have been looking forward to the start of this season and our new car since early last season, so it’s great that it is finally getting started. Last season was tough but it just gave us all added motivation to come back stronger. Introducing this new car, including completely new powertrain shows how serious we are about competing again. The TS050 HYBRID definitely feels like a major improvement, particularly thanks to the new engine and hybrid system. It’s impressive how powerful 8MJ is and the duration of the boost is really cool; this is something really positive for us this season. Our motivation and team spirit is really high. Everyone has been working so hard to be ready for the first race. Now I am ready to win some races this year and to be competitive again; that is the target.”

Stéphane Sarrazin (#6 TS050 HYBRID): “I’m really excited that the season is coming. We are testing a lot and the whole team is pushing really hard to make sure we have reliability and to fine-tune our car for the season. The Prologue will be the first time where we can see what Audi and Porsche did during the winter, so it will be interesting. Generally, of course I hope that we will be back in the game and that we can show good performance already in Silverstone. My first impressions of the TS050 HYBRID are very positive. It is definitely a big step forward and we improved every single part, particularly the powertrain. The battery itself is really incredible with 8MJ of boost; this is a very good point for us. We are in a busy period to prepare for the season but have a good starting point and we expect to be fighting at the front.”

Mike Conway (#6 TS050 HYBRID): “I obviously have high expectations for the upcoming season; the target is to get back to winning races. It is nice to have Kamui in the car crew; we’ve tested together already and he is definitely quick so we’re ready to fight. As a team we have made good progress over the winter and the new TS050 HYBRID is cool. We have taken a big step by moving into the 8MJ class and the new battery is impressive. The whole team has made a massive effort to change every aspect of the car, which is not a simple task, and we are all hugely motivated to get back to the front. At the moment it’s hard to tell where we are compared to the other manufacturers but we definitely made a big step forward.”

Kamui Kobayashi (#6 TS050 HYBRID): “I like the new car; it is definitely a big improvement which gives me a lot of hope for the season. I particularly like the new powertrain with turbo engine and 8MJ hybrid system; it’s great to drive this car! Of course, it is always challenging with such a new package and we have to work hard to maximise performance and reliability. This season is a new experience for me. I have raced in WEC before but that was only in the GT class; LMP1 cars are a totally different story and there are new things to learn. I’m happy to be part of the #6 car with Stéphane and Mike, who are really good drivers with a lot of experience. My target this season is to show strong performance and of course to win races. I can’t wait to get started in Silverstone.”

17 September   6 Hours of Circuit of the Americas (USA)

High-resolution copyright-free photos are available for editorial use at www.toyota-motorsport-photos.com. Rights-free running footage of the TS050 HYBRID can be downloaded from http://newsroom.toyota.eu/. 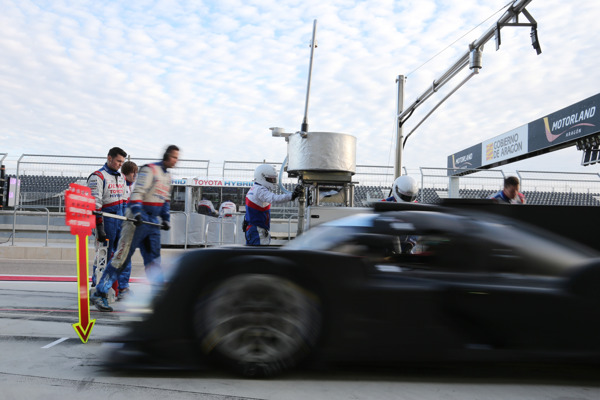